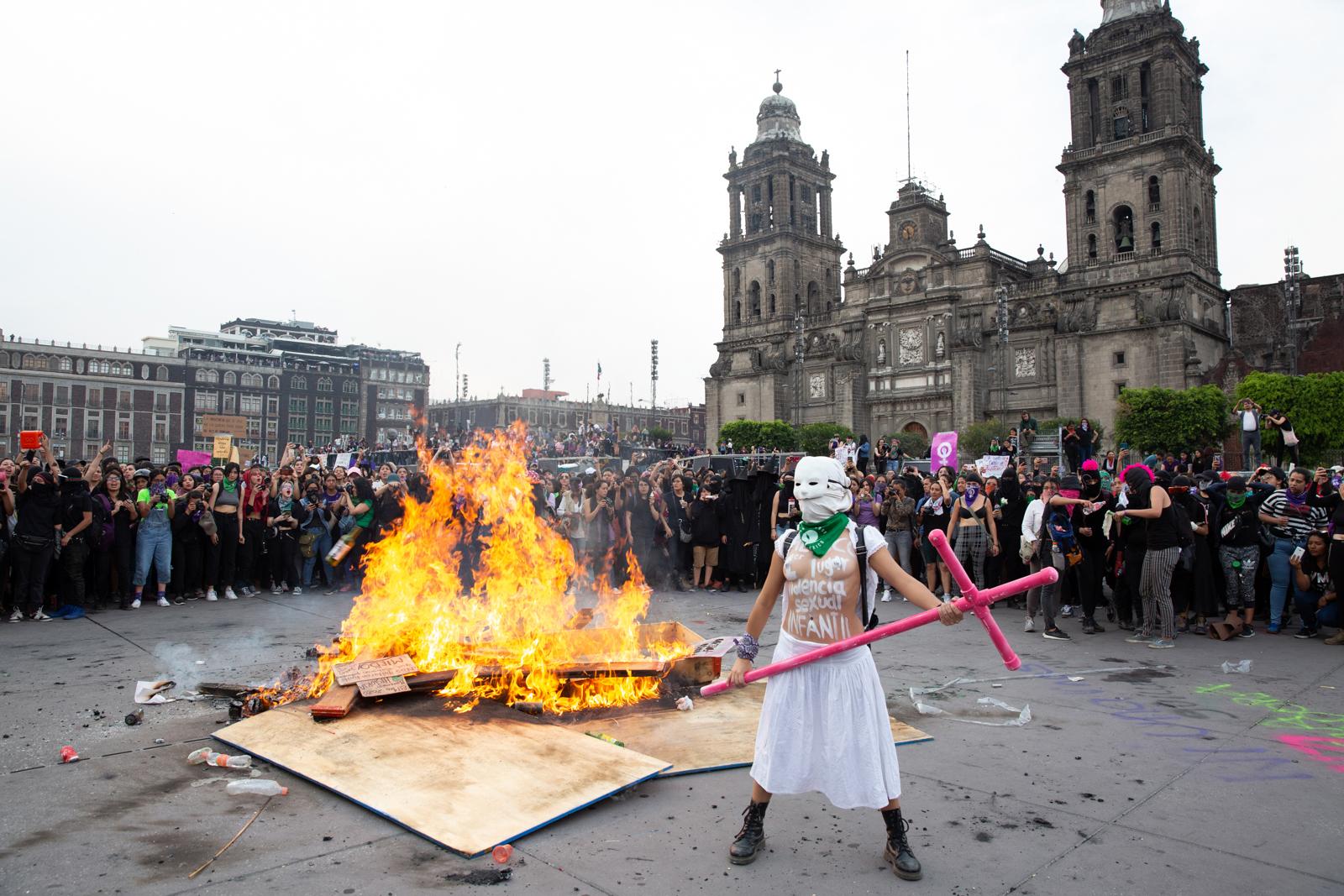 MEXICO
Demonstrators circle round a wood pile they set on fire as they rally against gender-based violence and inequality on International Women’s Day in Mexico City on March 8, 2020. According to government statistics, at least ten women are murdered every day in Mexico, making it one of the most dangerous countries in the world for girls and women. 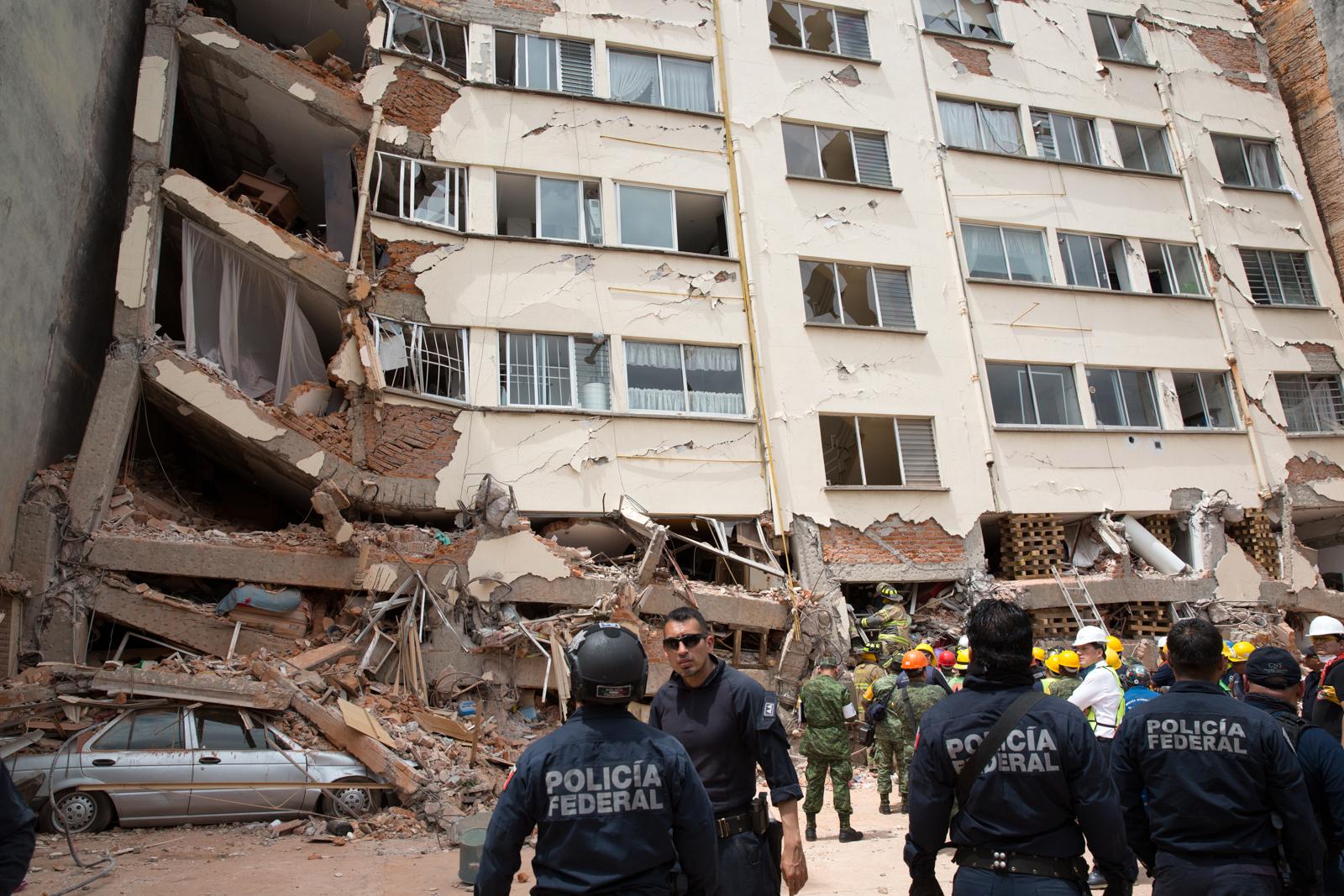 MEXICO
Ongoing rescue operation for survivors feared trapped in a collapsed building felled by a devastating earthquake, in the Lindavista neighborhood of Mexico City on September 20, 2017. A 7.1 magnitude earthquake rocked Central Mexico the day before, killing more than 300 people and causing serious damage to buildings in the capital. 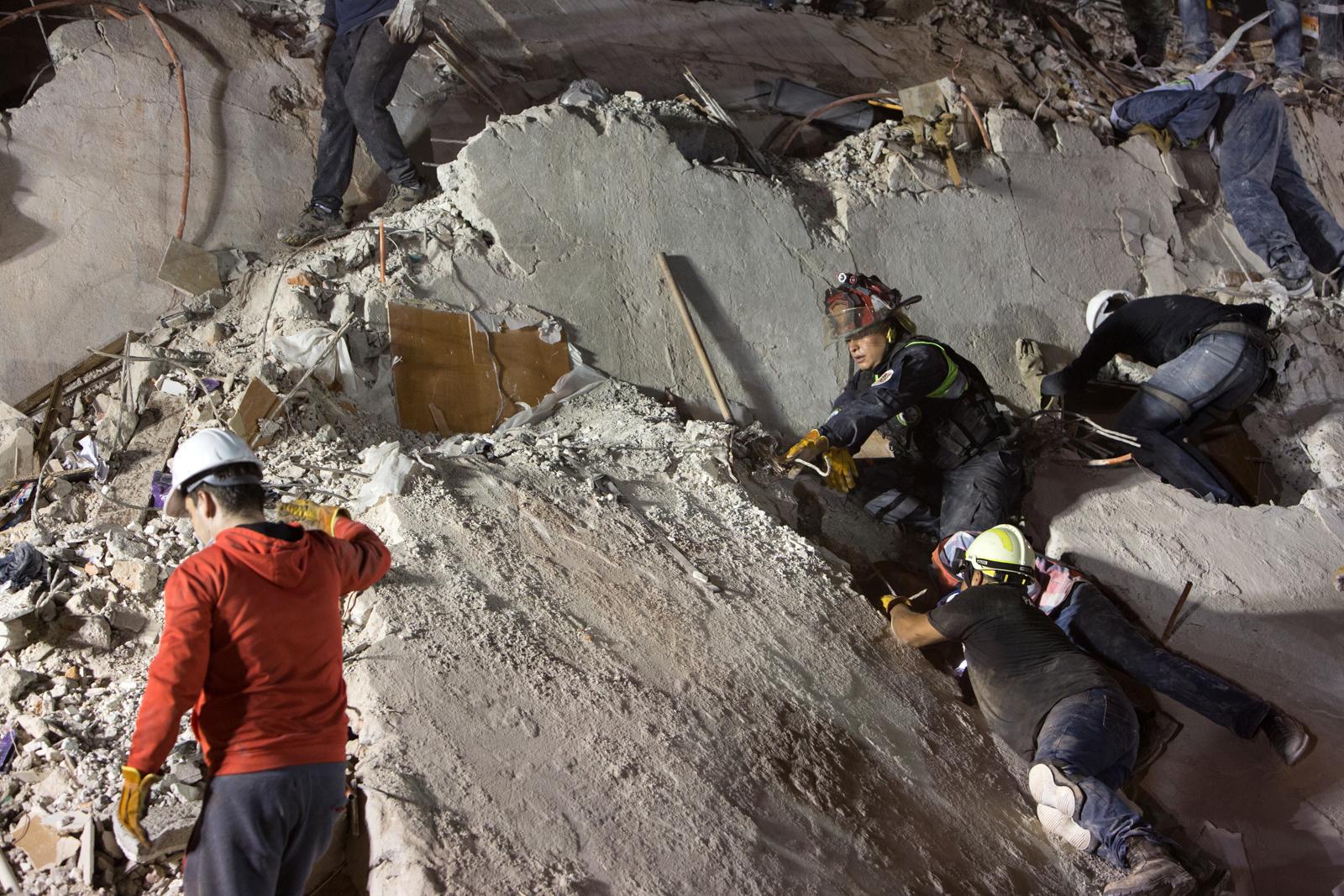 MEXICO
Rescue workers remove rubble and search for survivors feared trapped in a collapsed building felled by a devastating earthquake in the Condesa neighborhood, in Mexico City on September 21, 2017. A powerful 7.1 magnitude earthquake shook Central Mexico days earlier tumbling buildings into mounds of rubble and leaving dozens others severely damaged. 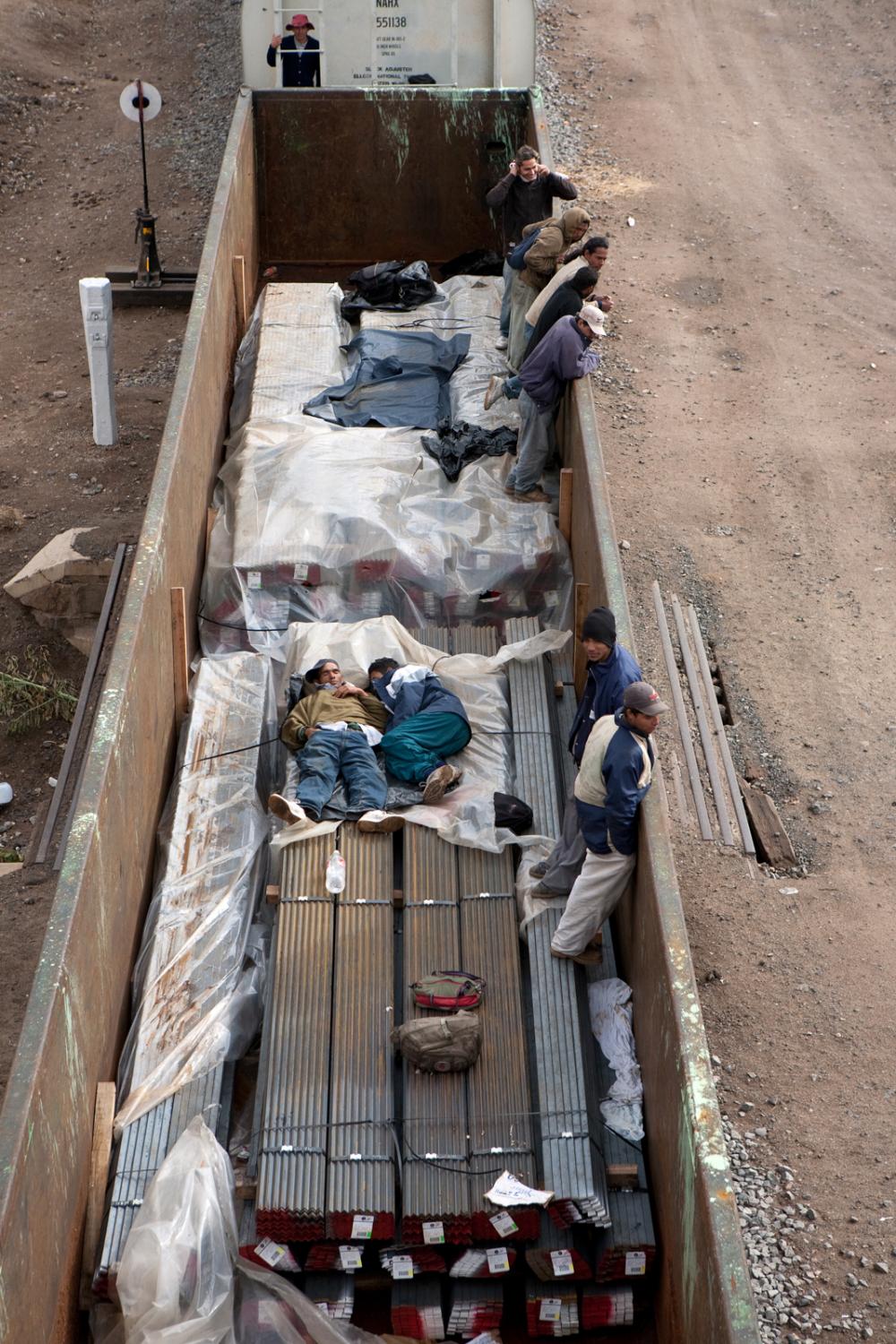 MEXICO
Central America migrants travel on a freight train heading north in Zacatecas state on June 10, 2018. The journey from Central America to the U.S.-Mexico border is dangerous and long with no assurance they will make it to their destination. 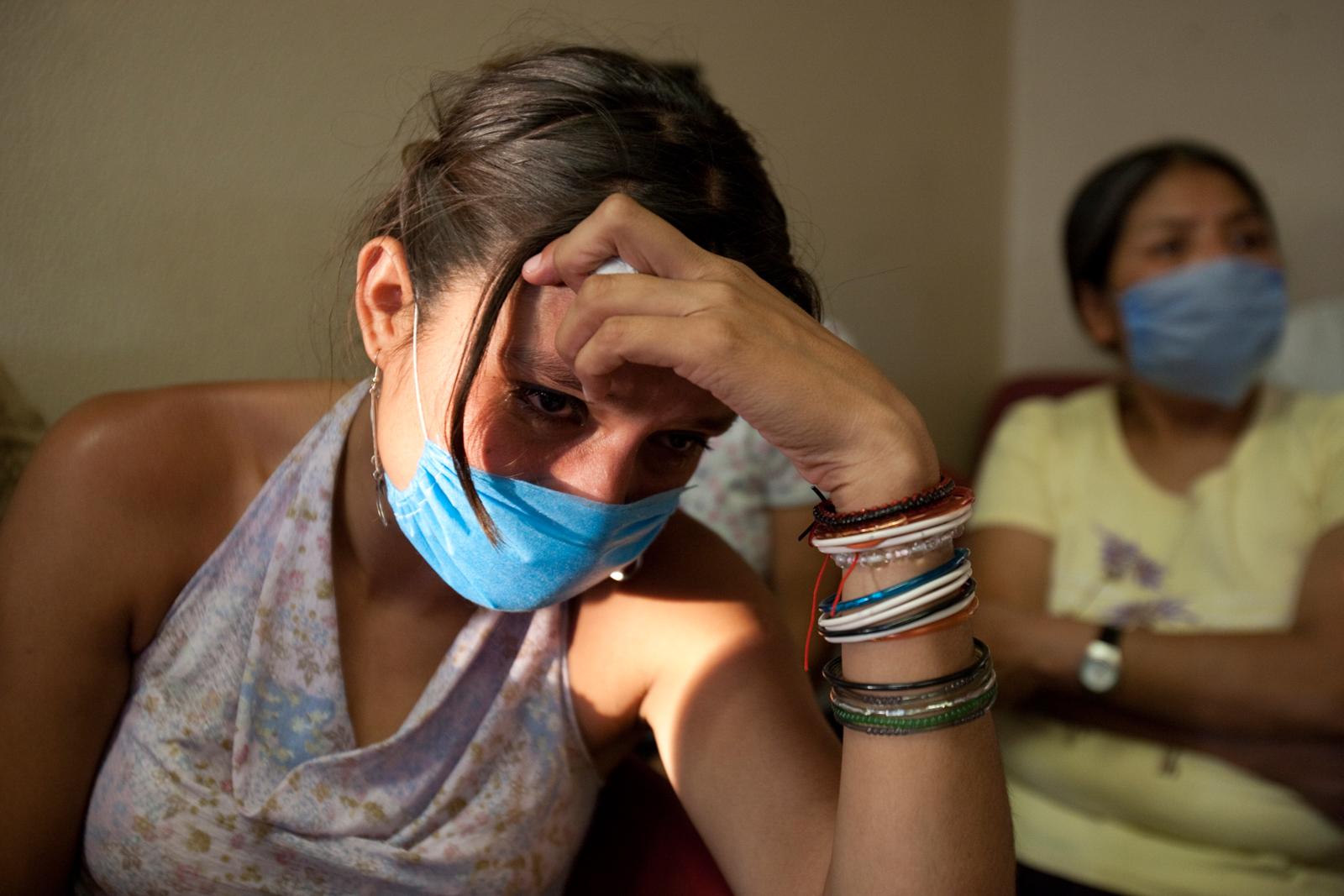 MEXICO
A Mexican woman experiencing swine flu-like symptoms sits in an emergency room of the General Hospital in the Iztapalapa borough of Mexico City on April 28, 2009. She waited four hours before she could be  examined by a doctor. 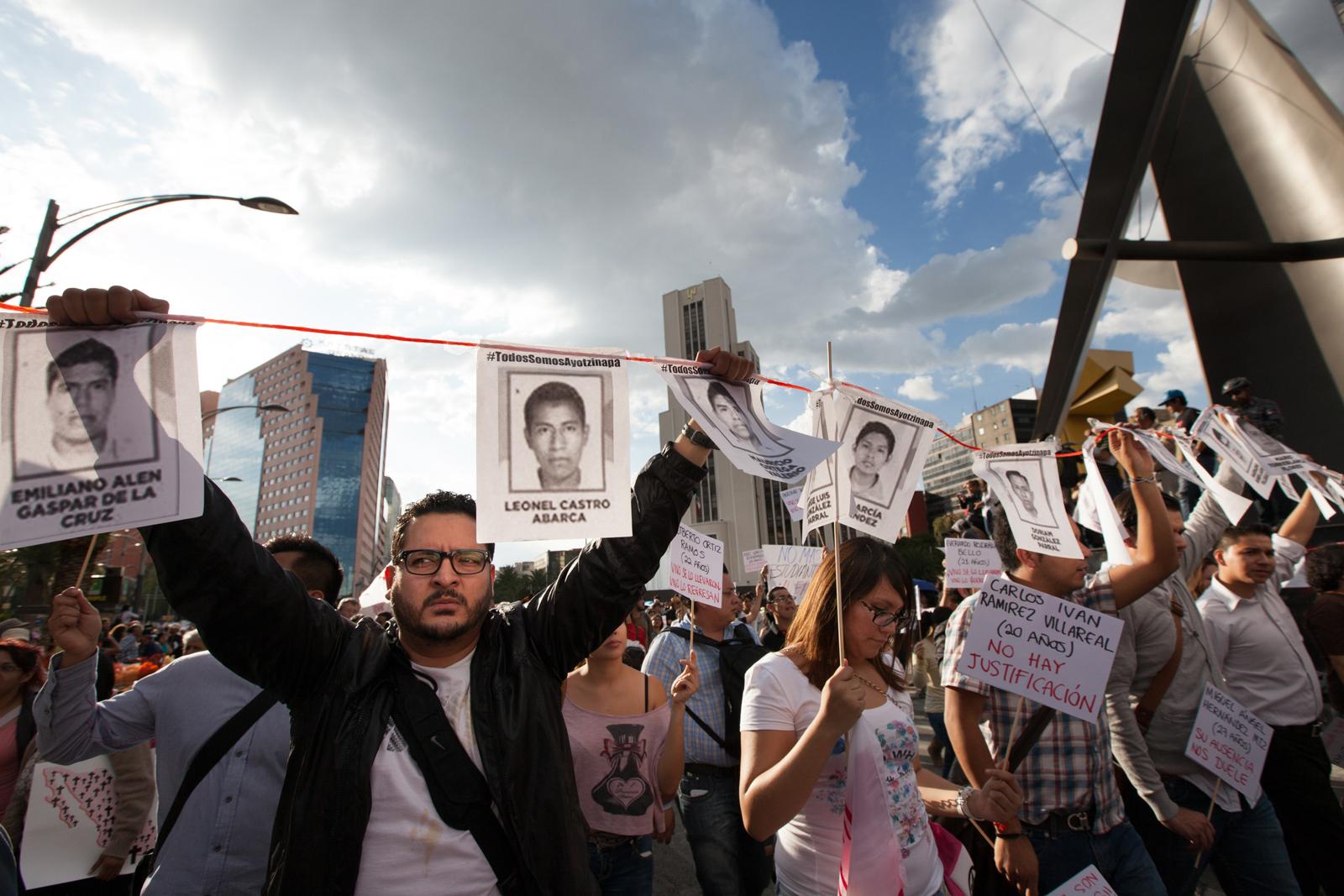 MEXICO
Thousands of protesters march to demand justice for the 43 missing Ayotzinapa students, in Mexico City on October 8, 2014. The 43 Ayotzinapa teacher's college students who were in the town of Iguala allegedly hijacking buses, were intercepted by local police in September of 2014 and turned over to a drug cartel. Six years later, authorities issued dozens of arrests warrants for police and soldiers who they believe participated in the disappearances of the 43 students. 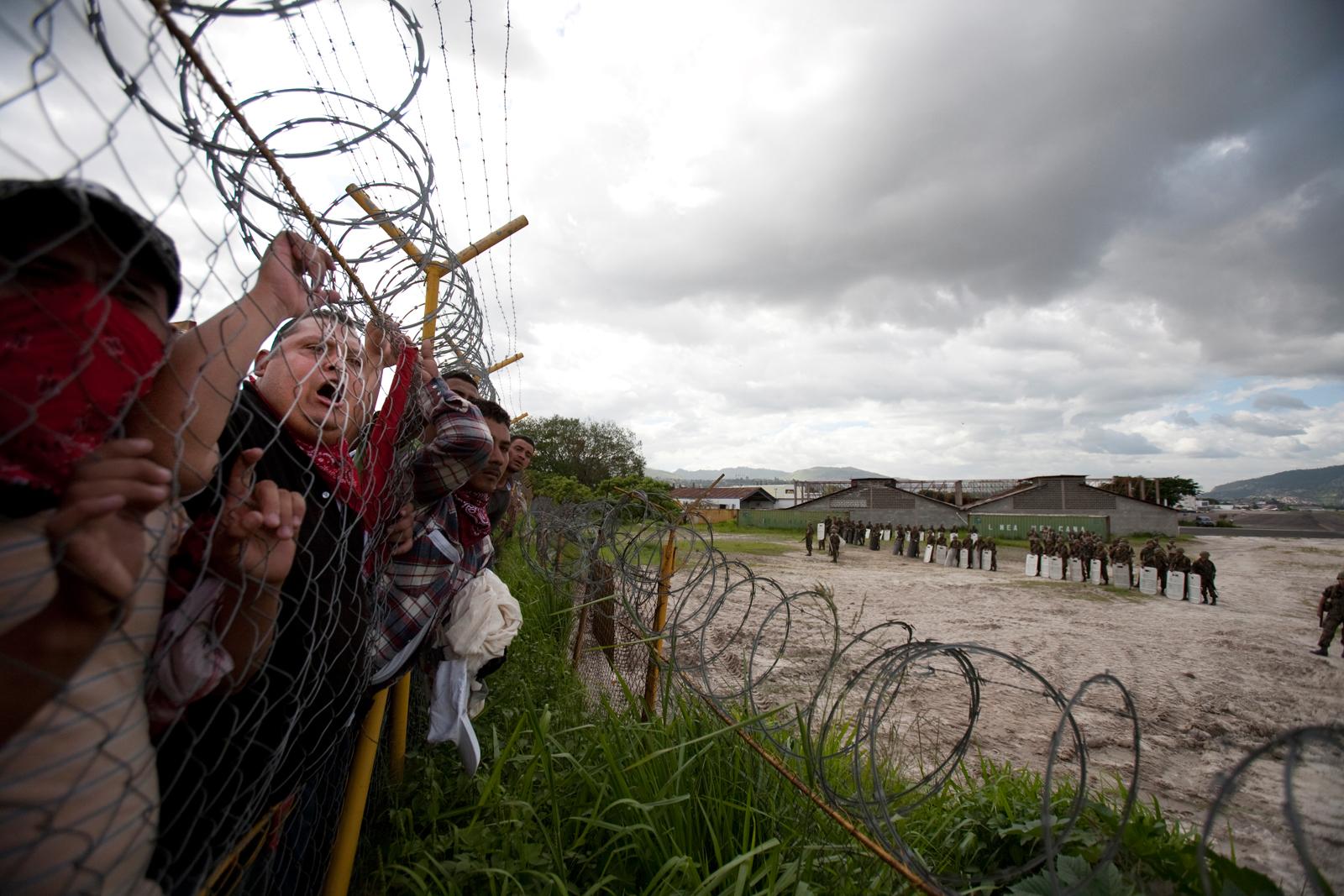 HONDURAS
Supporters of ousted Honduran President Manuel Zelaya stand behind a security fence surrounding the perimeters of the Toncontín International Airport as they await Zelaya’s return home, in Tegucigalpa on July 5, 2009, just a week after SOA graduates orchestrated a military coup against Zelaya and forced him into exile. 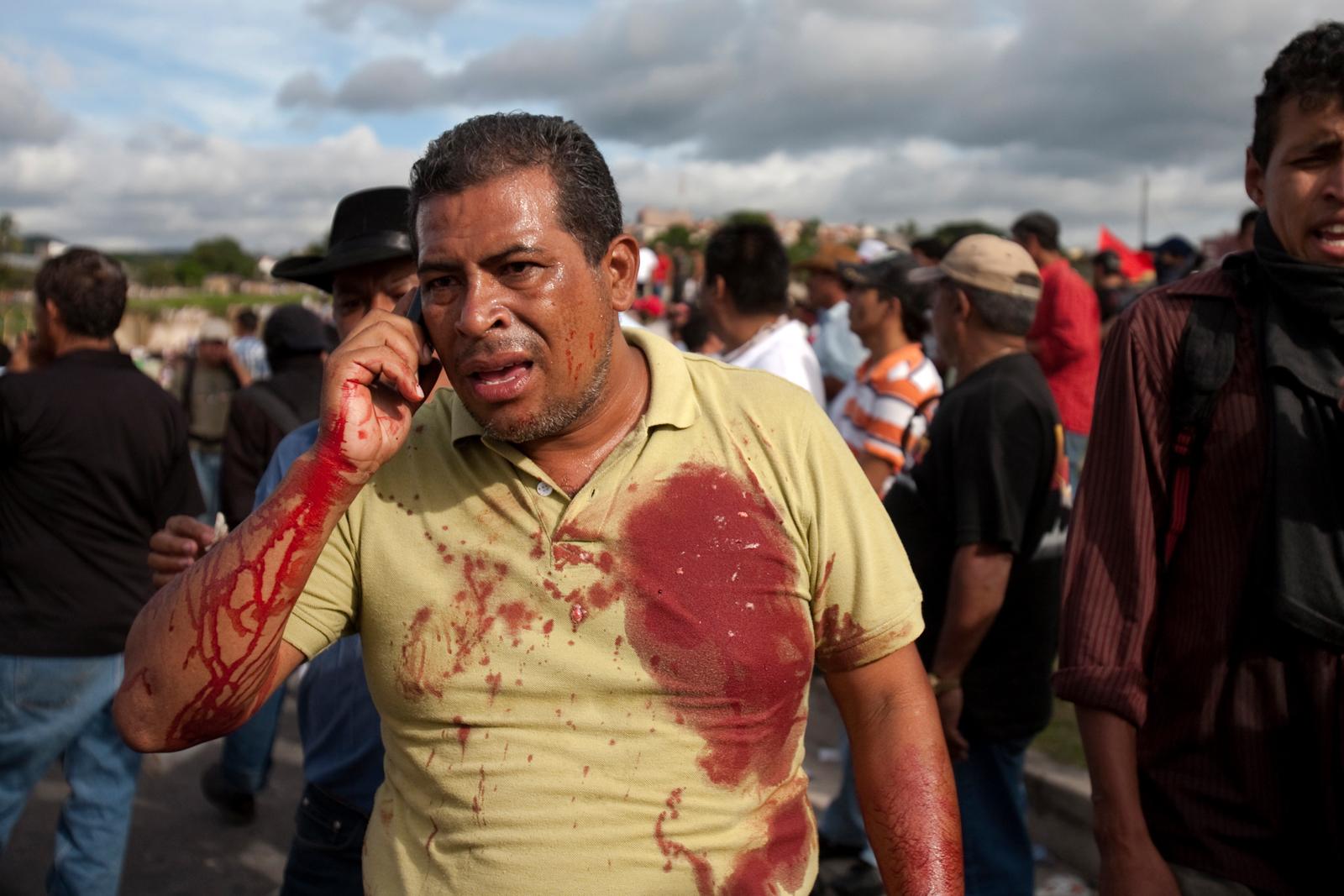 HONDURAS
A supporter of ousted Honduran President Manuel Zelaya, whose shirt is soaked with the blood of the young activist Isy Obed Murillo Mencias fatally shot by a sniper during clashes between soldiers and Zelaya supporters, checks in with a relative outside the Toncontín International Airport in Tegucigalpa on July 5, 2009, where supporters had gathered to welcome Zelaya’s attempted return. 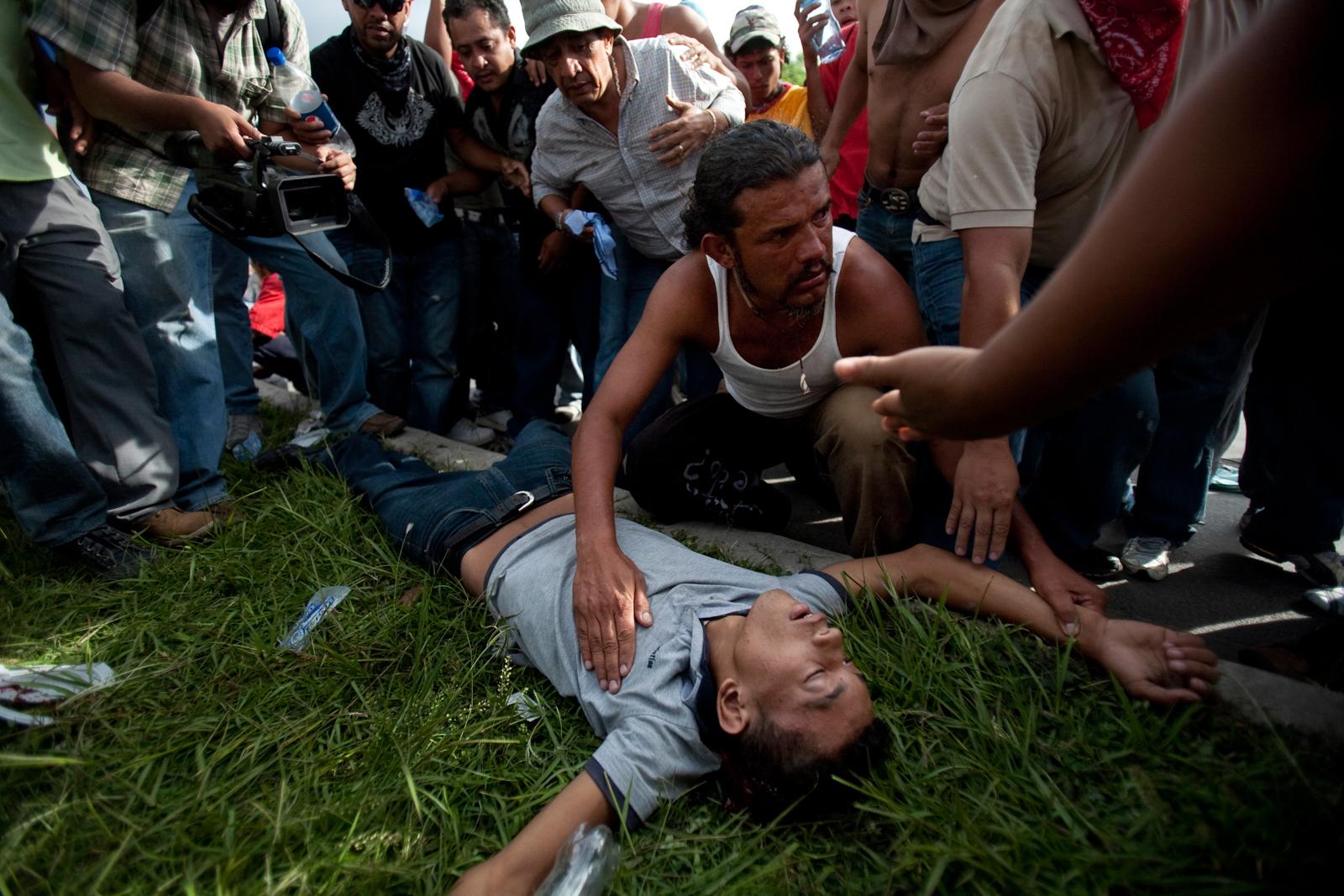 HONDURAS
Supporters of ousted Honduran President Manuel Zelaya gather around the body of 19-year-old Isy Obed Murillo Mencias after he was shot dead by a sniper at the Toncontín International Airport in Tegucigalpa on July 5, 2009. 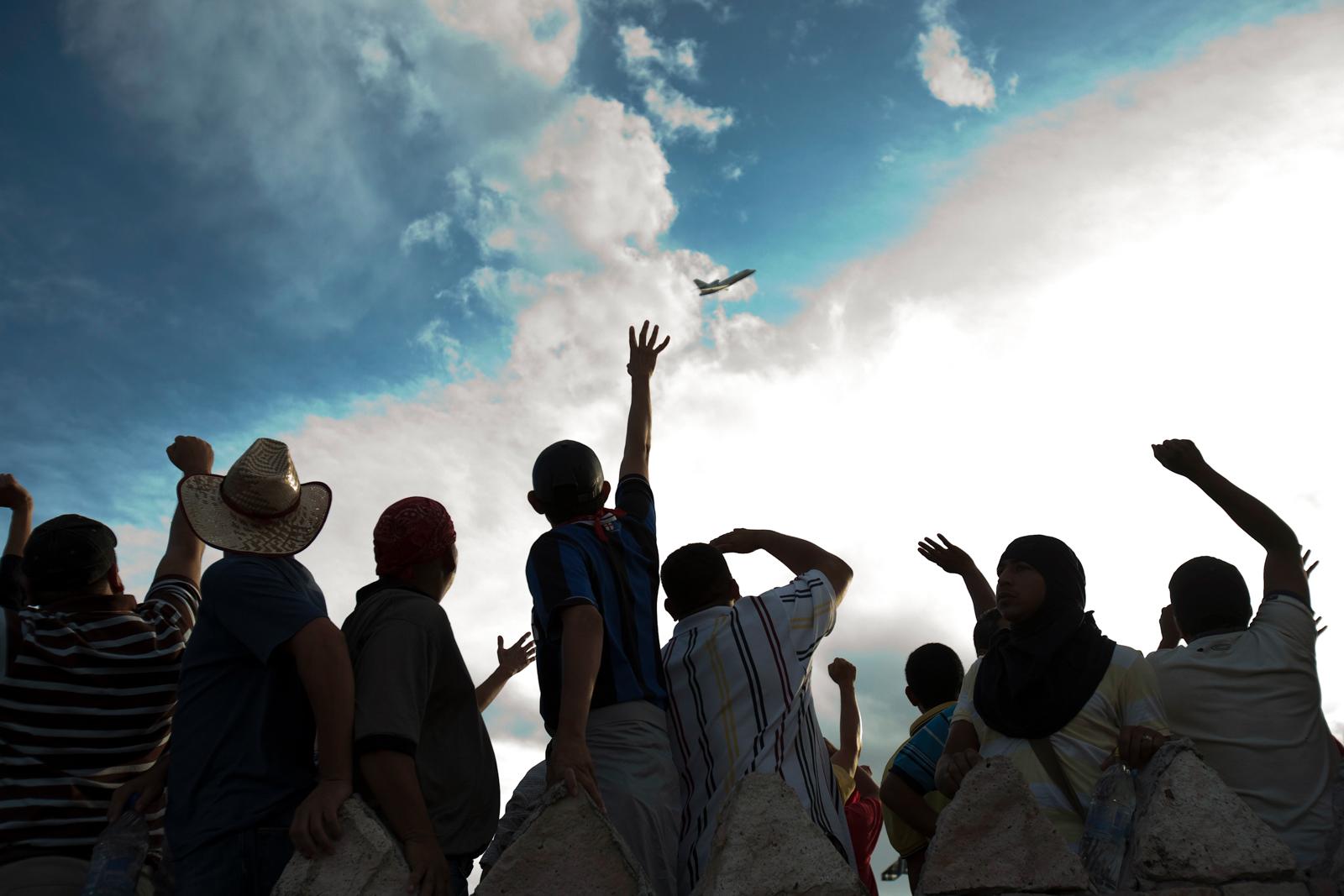 HONDURAS
Supporters of ousted Honduran President Manuel Zelaya cheer as his airplane flies over the Toncontín International Airport in Tegucigalpa on July 5, 2009. The toppled leader’s plane circled in an effort to land but the runway was blocked by military vehicles and troops. He was forced to land in Nicaragua instead. 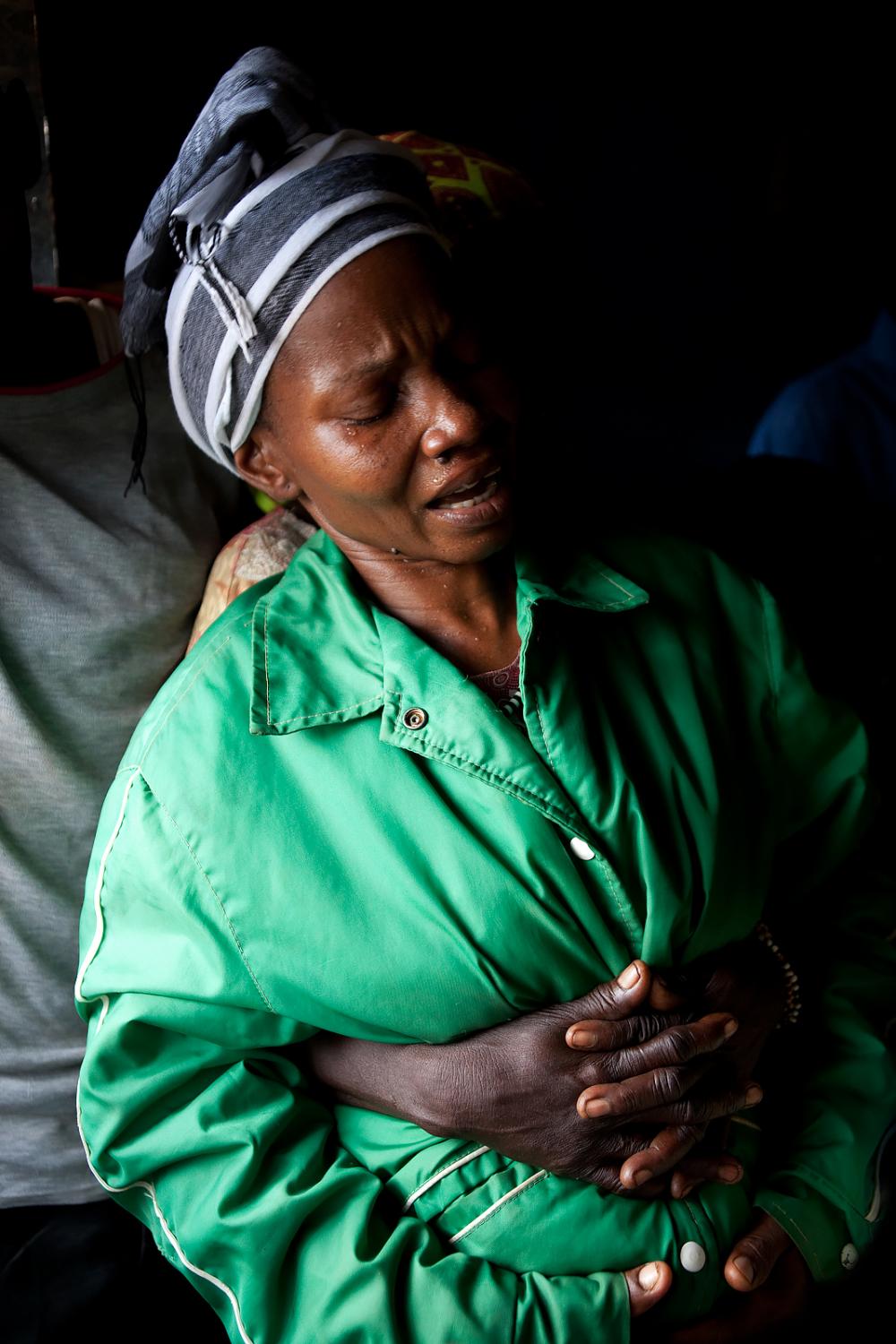 SOUTH SUDAN
A relative grieves during a burial service for 49-year-old Gabriel Makana in Yambio in May 18, 2010. Makana along with two other government officials were killed a day earlier in an ambush by the Lord’s Resistance Army or LRA. 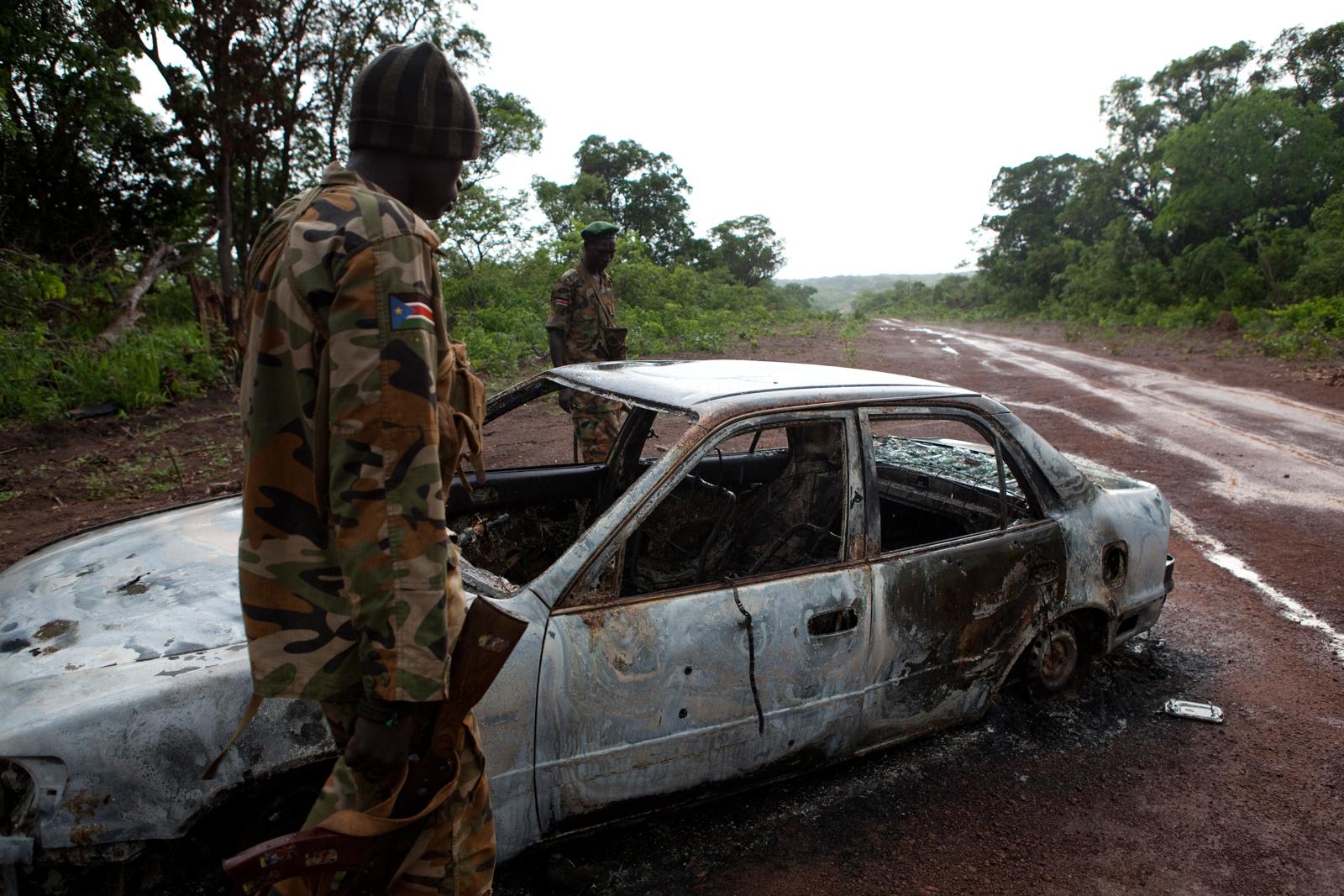 SOUTH SUDAN
Sudan People's Liberation Army soldiers inspect the shell of car ambushed and burnt by members of the Lord’s Resistance Army or LRA, on the road between Yambio and Tambura on May 22, 2010. Three State Ministry of Education officials perished in the ambush. The LRA attacks in the area have led to thousands fleeing to larger towns for protection. 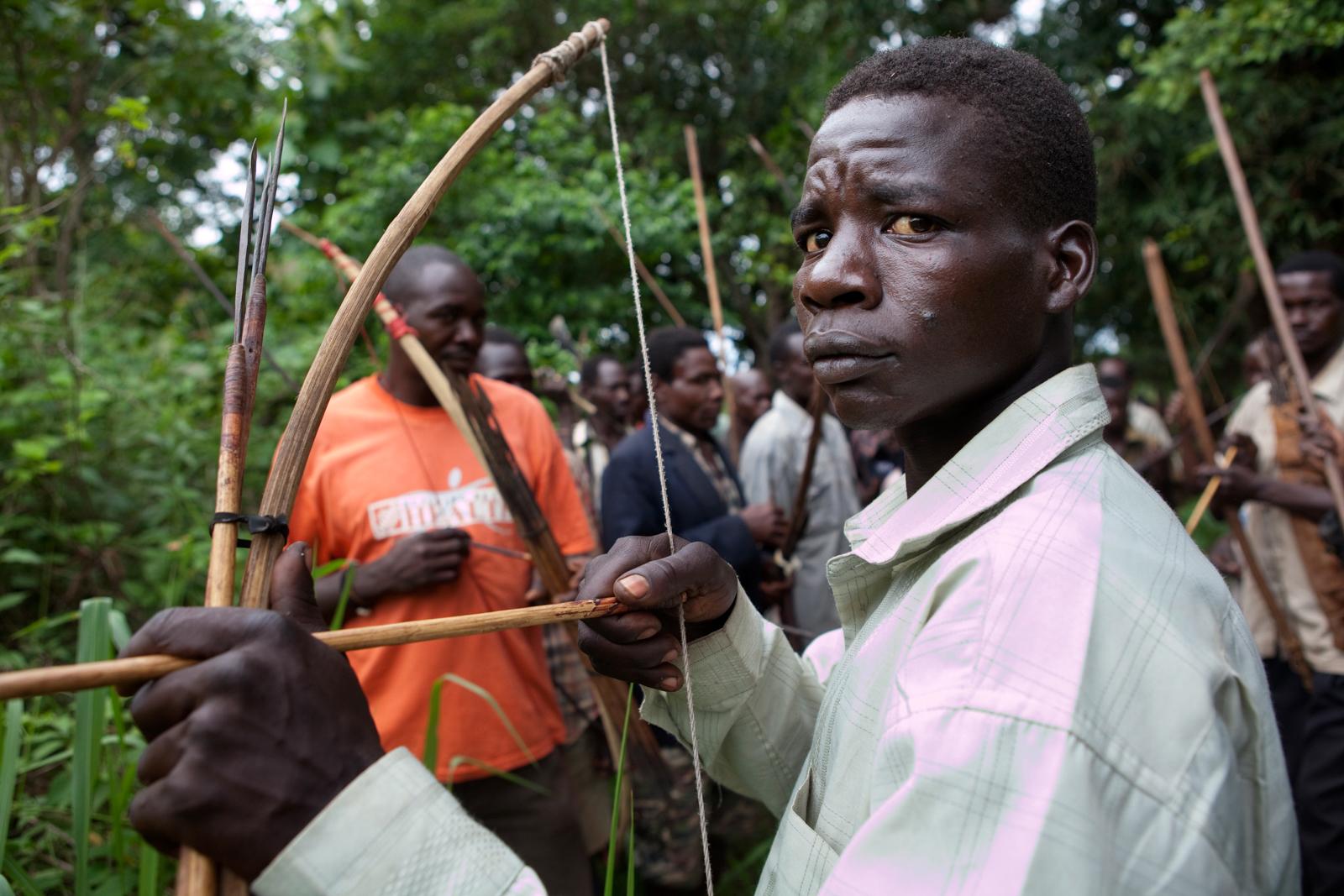 SOUTH SUDAN
Arrow Boys patrol in Western Equatoria state on May 10, 2010. Western Equatoria state has suffered years of attacks by the Lord’s Resistance Army or LRA. In the absence of an effective response by the Sudanese government, many local men and boys have organized self-defense forces known as the Arrow Boys who battle the relatively well-armed LRA with traditional weapons such as bows, arrows, spears and clubs, treated with poisonous. 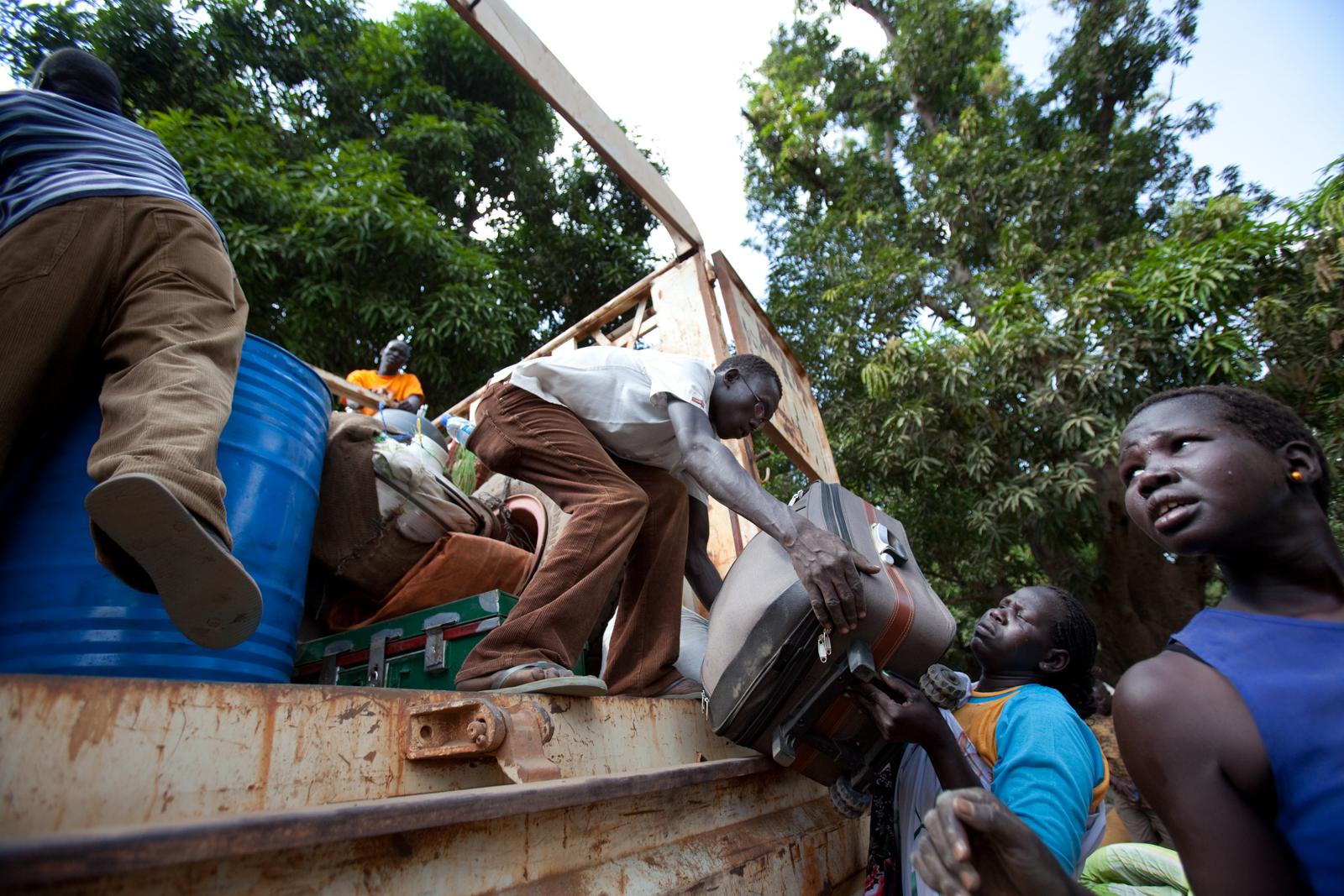 SOUTH SUDAN
Southern Sudanese returning to their villages load belongings onto an IOM truck in Juba on December 15, 2010. Over 55.000 Southerners returned for the upcoming January 9th independence referendum, in which 99% of ballots cast voted to secede from the North. Many fled to the North during the second North-South civil war, which began in 1983 and ended with a 2005 peace deal that granted the South the right to secede through a referendum. 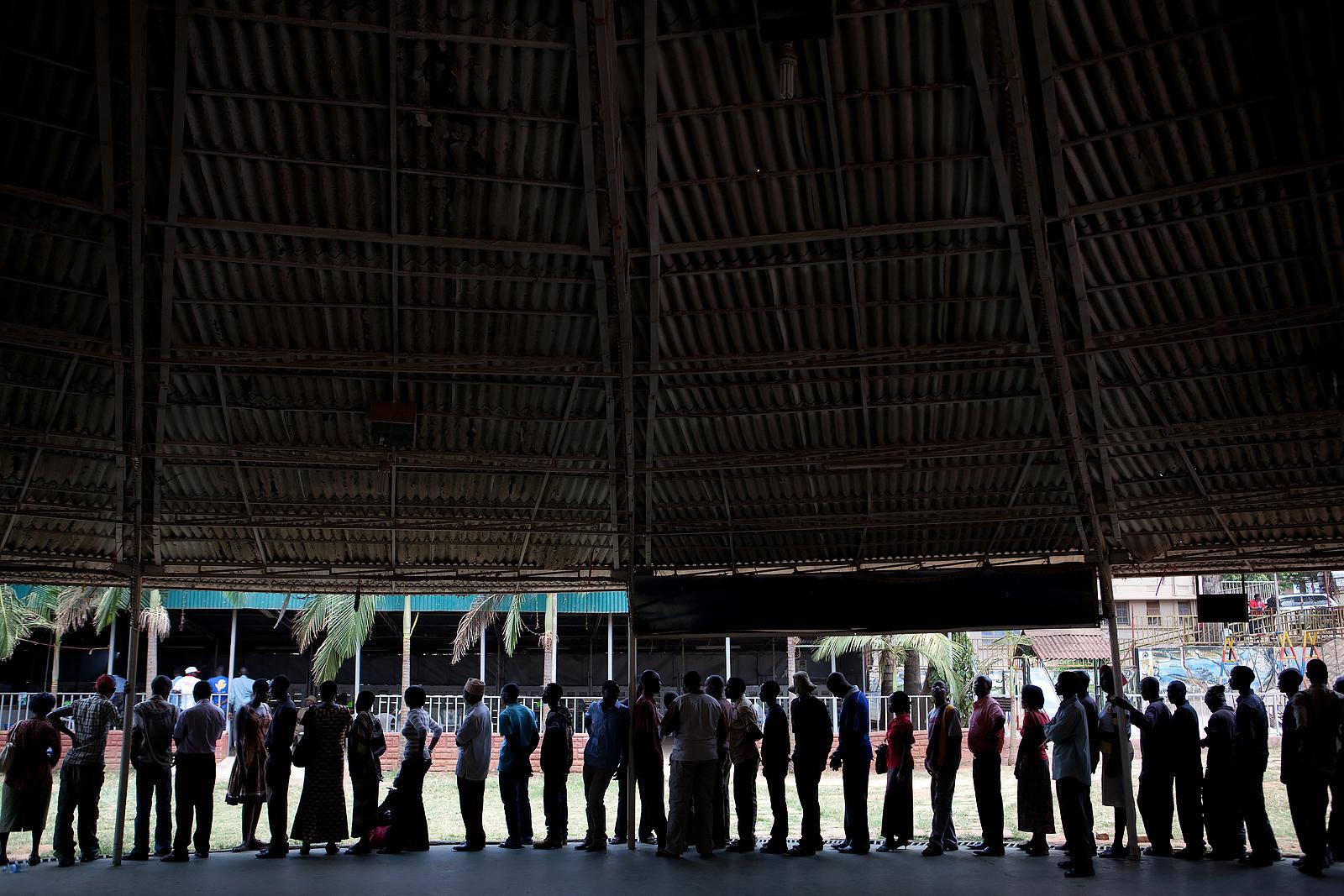 UGANDA
Ugandans line up to vote in the Presidential election at a polling station in Kampala on February 18, 2011. The incumbent president, Yoweri Museveni, was re-elected to a fourth, five-year term in a hotly contested election. 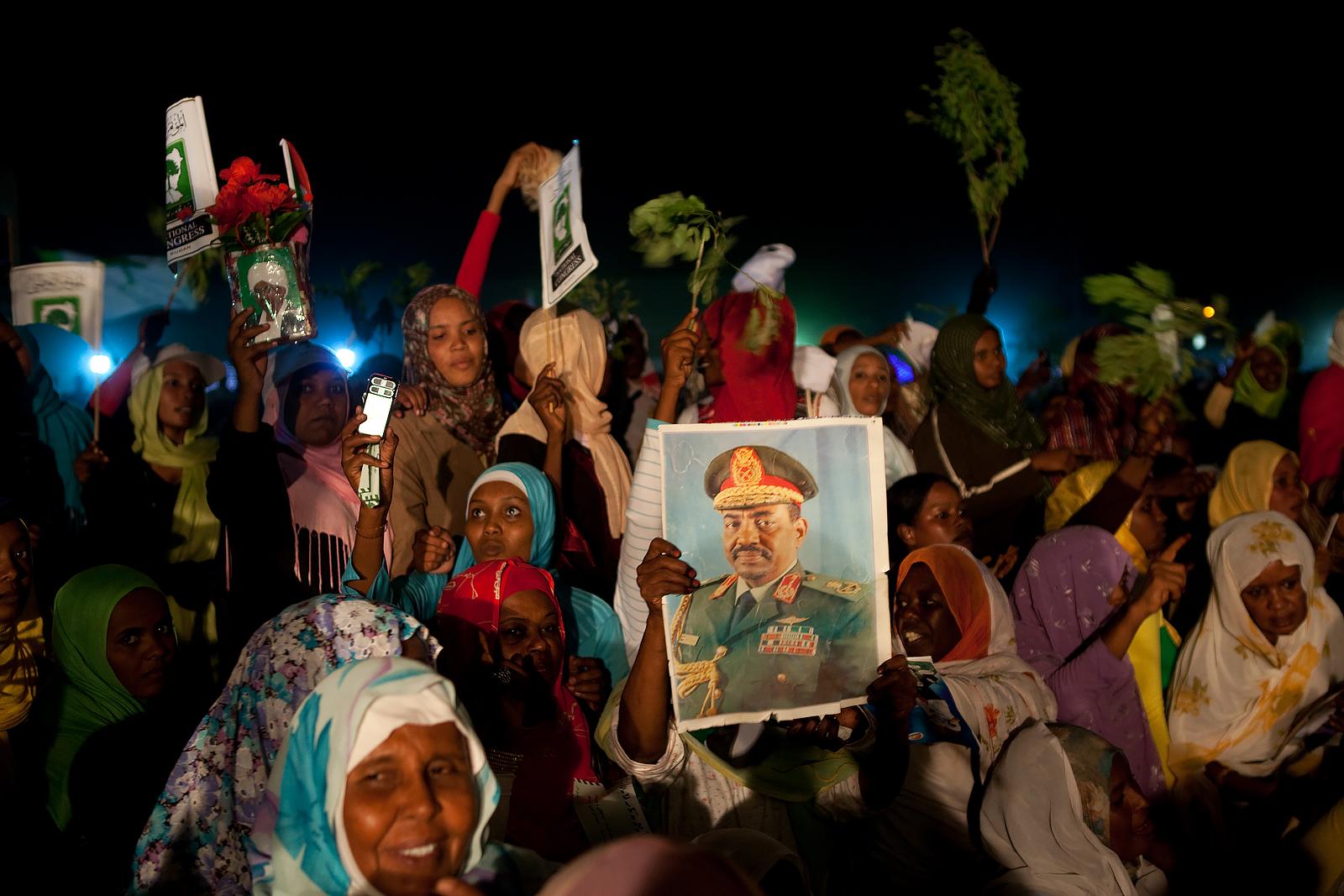 SUDAN
A supporter holds an image of Sudan's President Omar al-Bashir as a crowd gathers outside the National Congress Party headquarters after he was re-elected to another five-year term, in Khartoum on April 26, 2010. Bashir became the first leader to be elected while facing an international arrest warrant for alleged crimes he orchestrated in the Western region of Darfur. 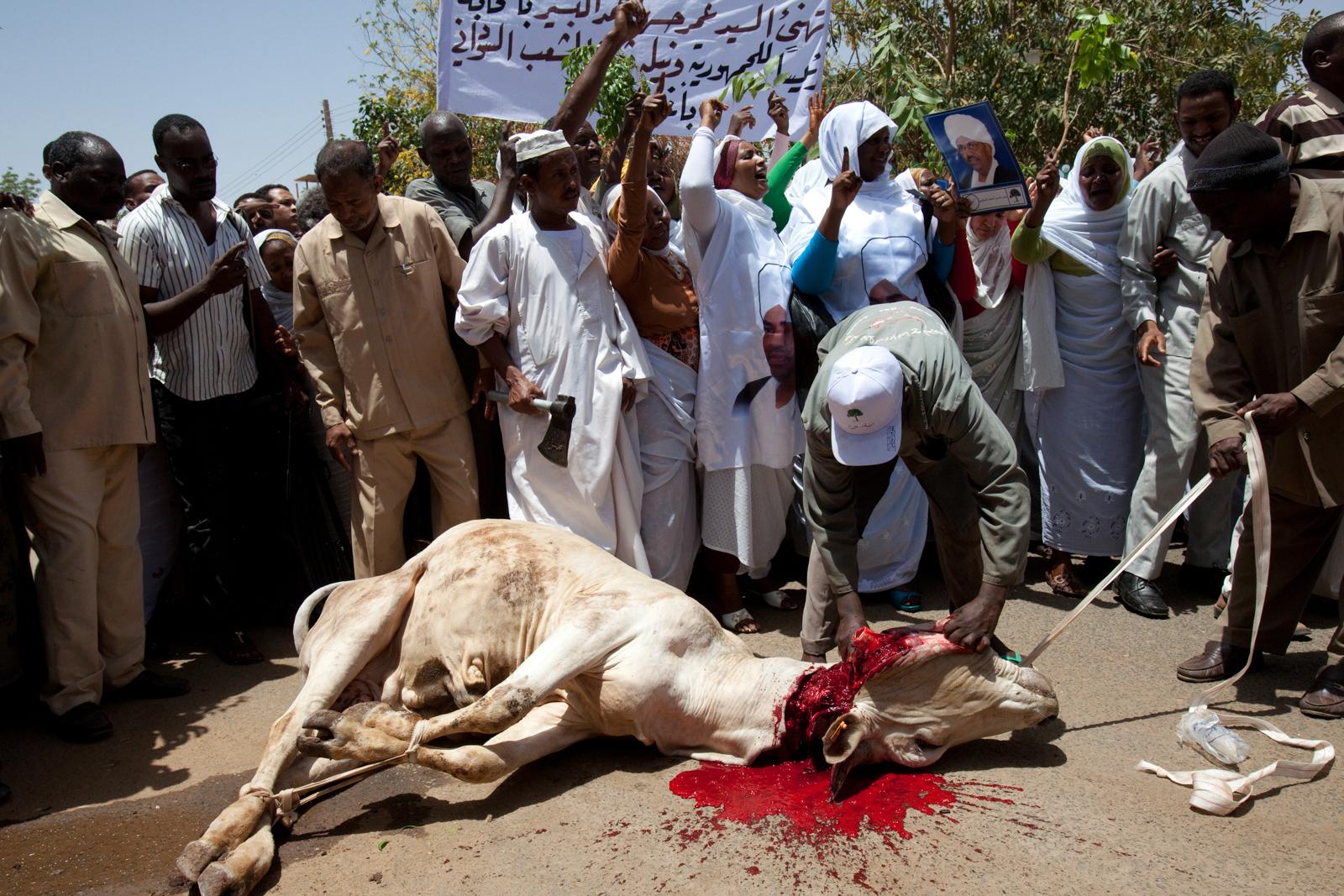 SUDAN
A cow is slaughtered during a ritual honoring Sudan's President Omar al-Bashir in response to his re-election, during a rally at the Council of Ministers Ministry in Khartoum on April 28, 2010. Bashir received 68% of vote in Sudan’s first multiparty elections in more than 20 years. 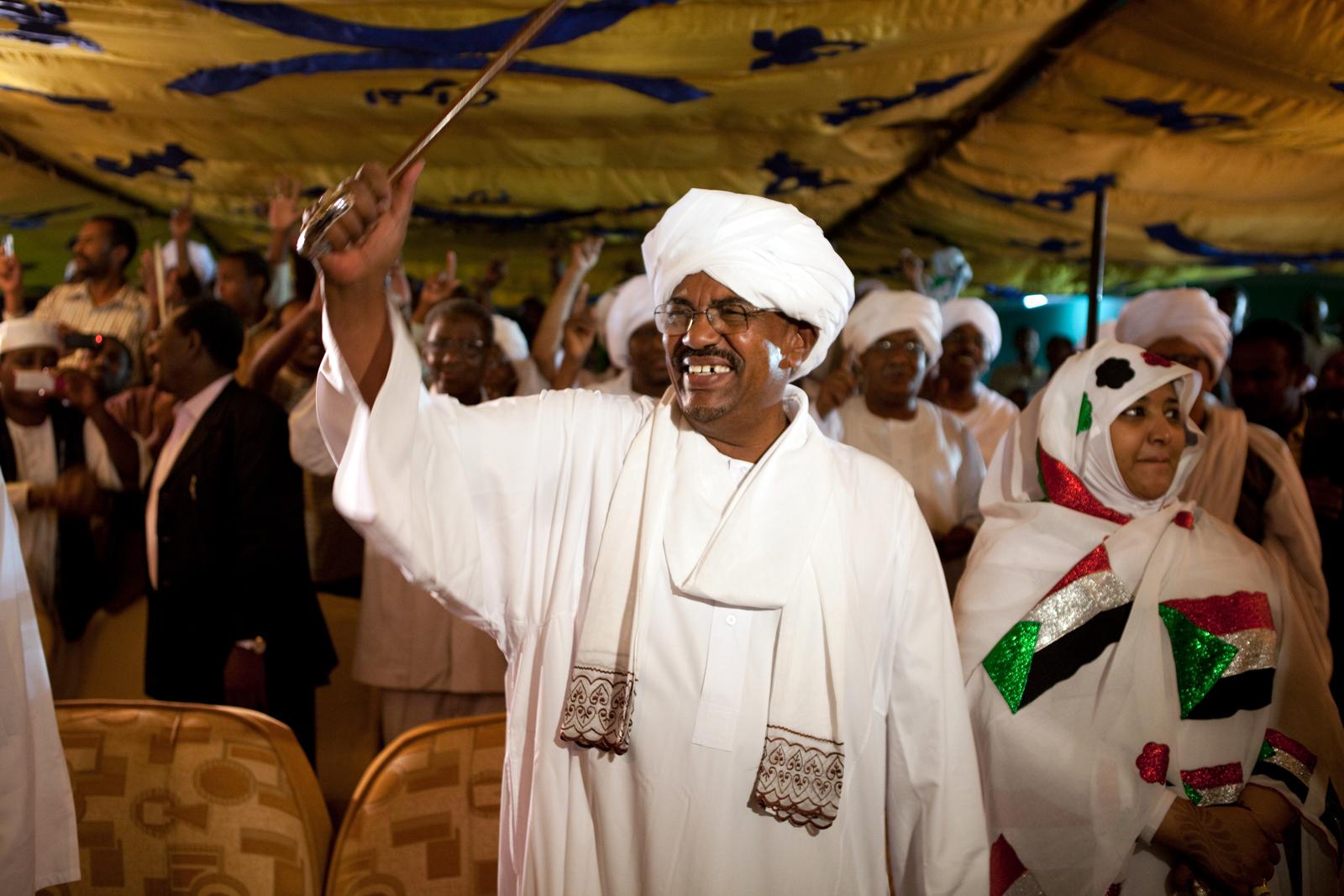 SUDAN
Sudanese President Omar al-Bashir, accompanied by his wife Wadad Babaker, attends a victory celebration at the National Congress Party headquarters after he was re-elected to another five-year term, in Khartoum on April 26, 2010. Bashir was deposed in a coup d'état in 2019 after a 30-year rule. 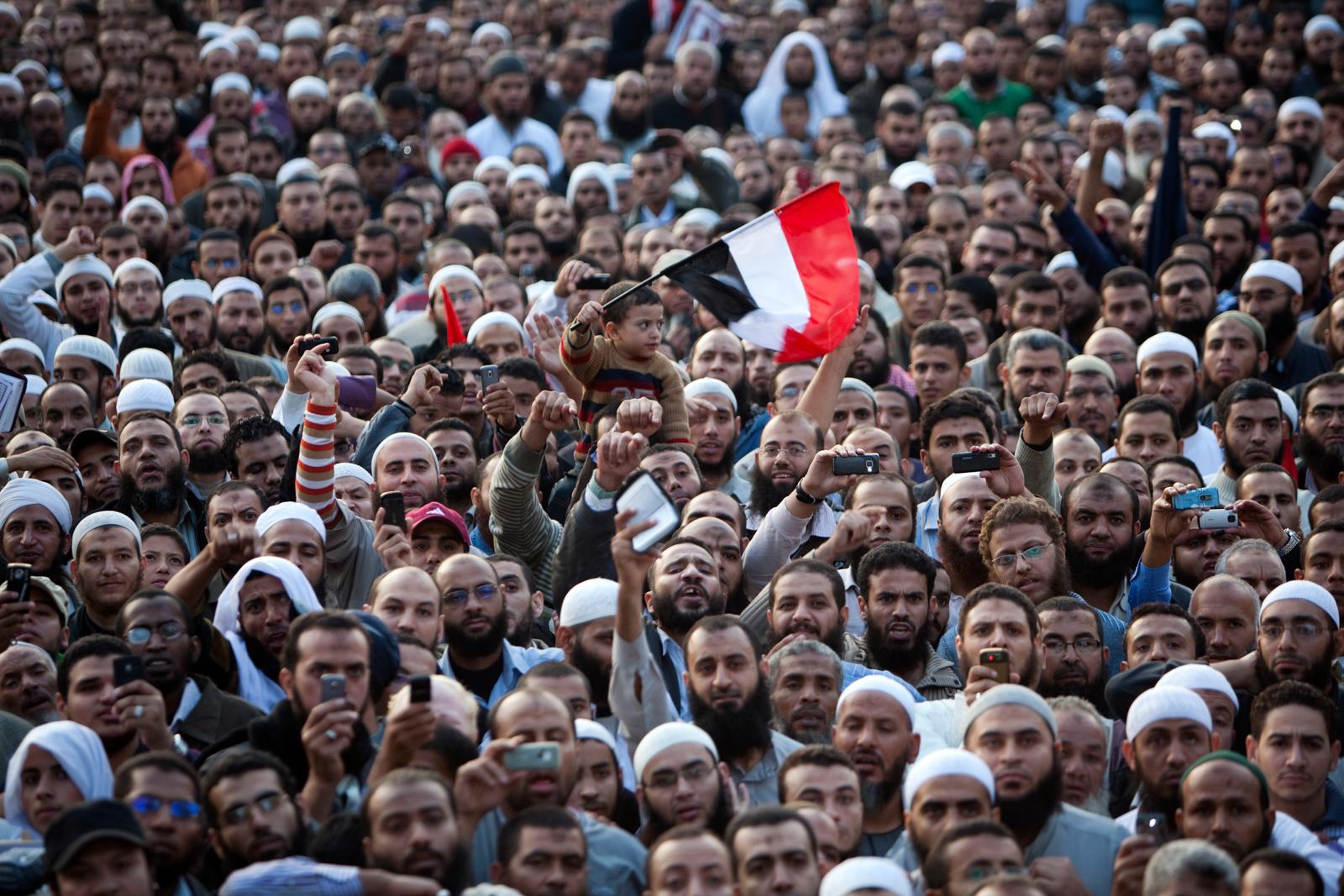 EGYPT
Salafi al-Nour Party’s supporters gather during a demonstration at Tahrir Square in Cairo on November 18, 2011, with Islamists in the forefront to pressure the military government to transfer power to elected civilian rule, after the cabinet tried to enshrine the army's role in a constitutional proposal, ahead of the upcoming parliamentary elections. The three-round elections will be Egypt's first since a popular revolt unseated former president Hosny Mubarak in February. 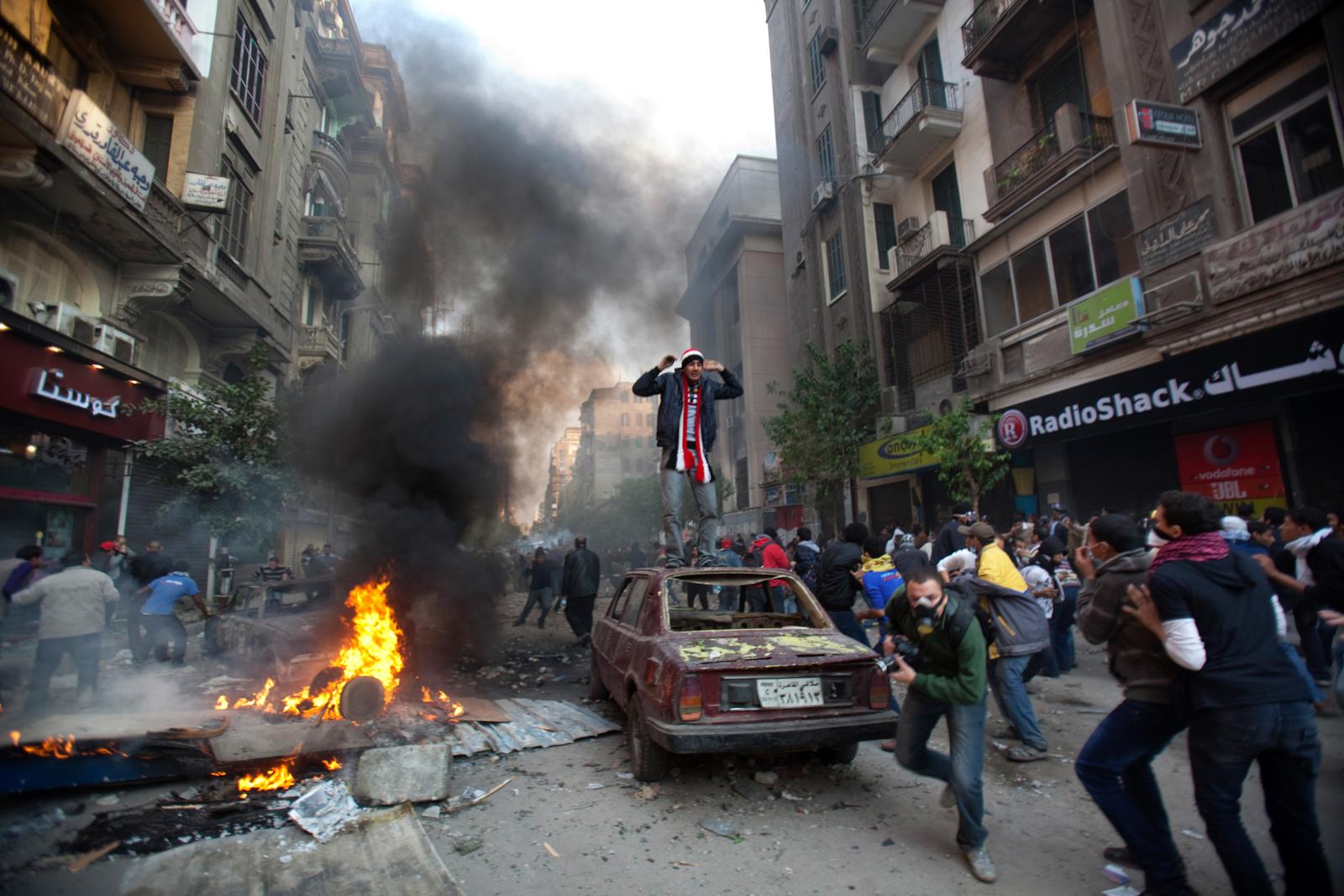 EGYPT
A protester stands on top of a car next to a burning barricade during clashes between protesters and police, on the third straight day of violence in Cairo on November 21, 2011. Protesters are calling on the interim military government to announce a date for the transfer of power to a civilian administration. The clashes were the biggest outbreak of violence here since the ouster of President Hosni Mubarak in February and the most violent manifestation yet of the growing anger at the ruling military council. 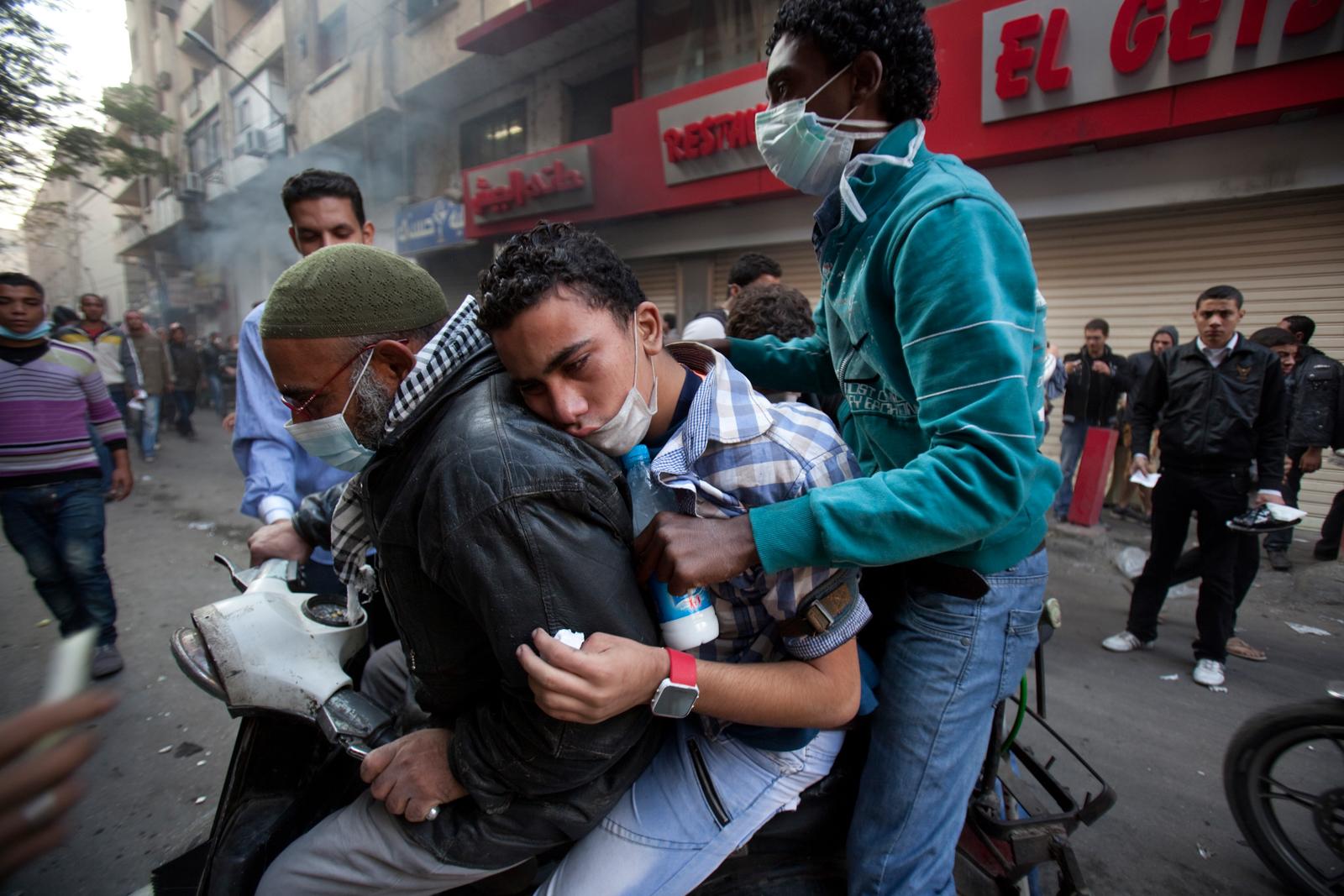 EGYPT
Egyptians men drive their motorbike to transport an injured protester to a makeshift clinic during the clashes with the Egyptian riot police in Tahrir square in Cairo on November 21, 2011. Protesters are calling on the ruling military to announce a date for the transfer of power to a civilian administration. The clashes were the biggest outbreak of violence here since the ouster of President Hosni Mubarak in February and the most violent manifestation yet of the growing anger at the ruling military council. 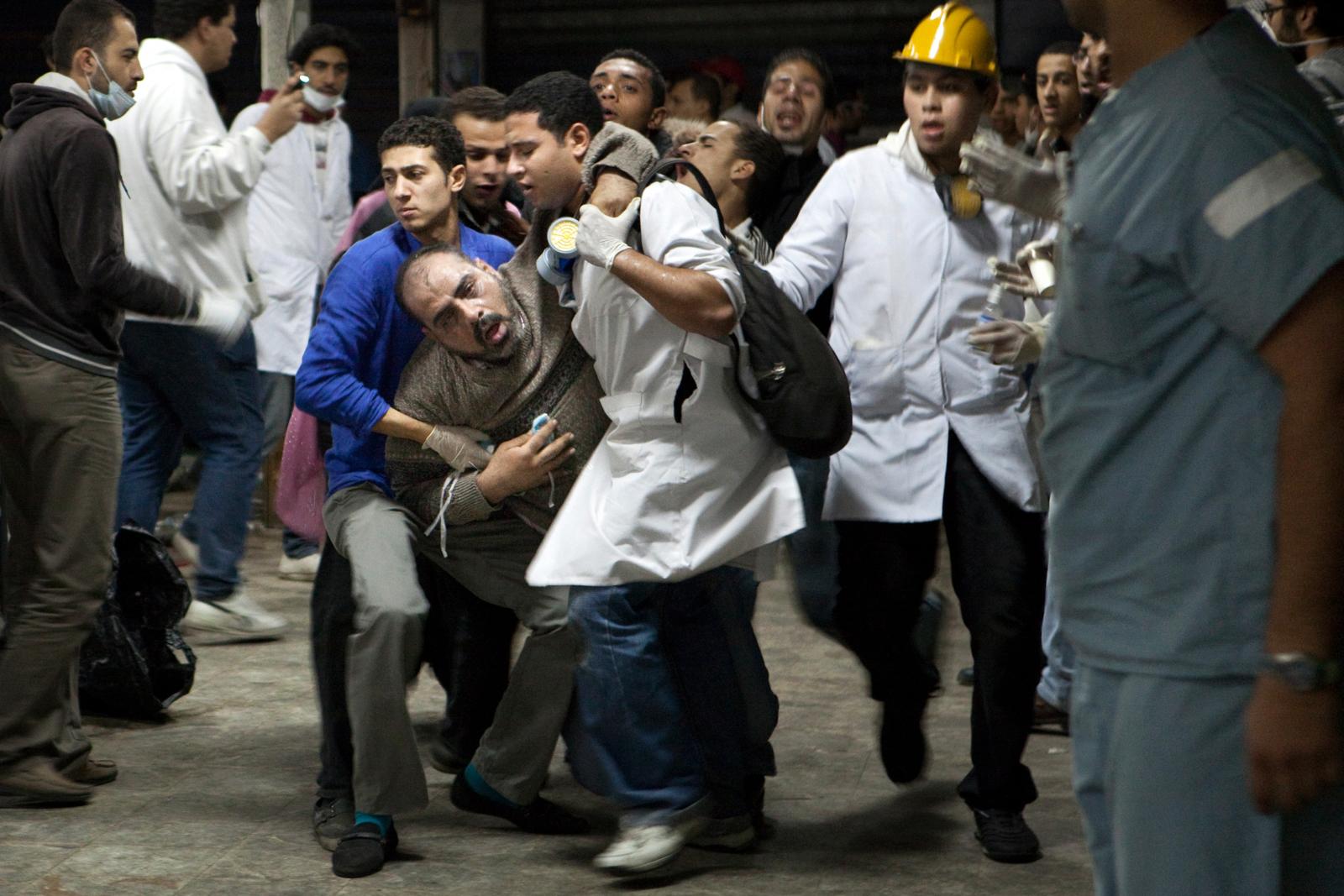 EGYPT
Protesters and volunteer doctors help a man affected by tear gas launched by riot police, in Cairo on November 23, 2011. Street battles raged around the heavily fortified Interior Ministry, near Tahrir Square, with police and army troops using tear gas and rubber bullets to keep the protesters from storming the ministry. The United Nations has strongly condemned what it called the use of excessive force by security forces. 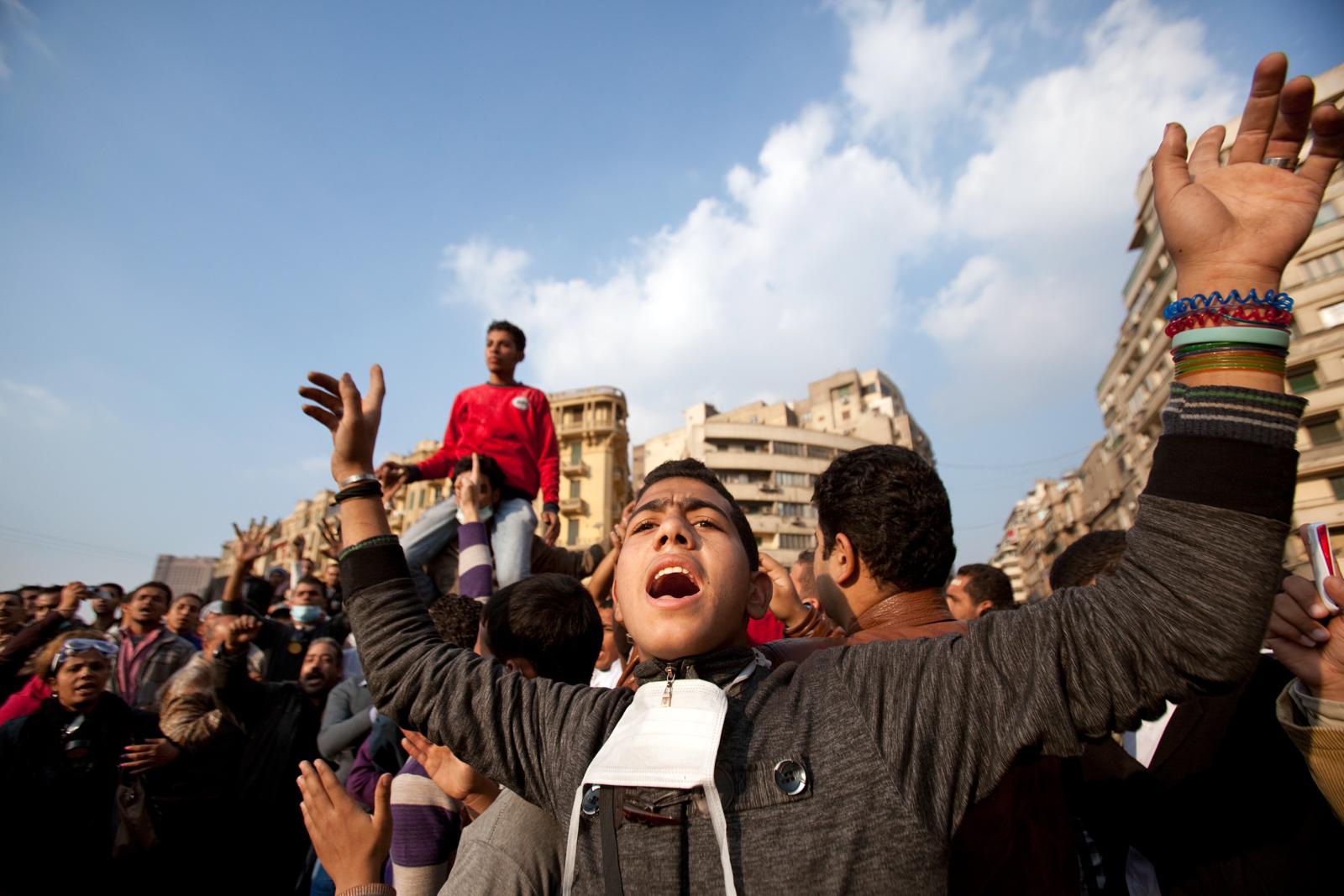 EGYPT
Protesters chant anti-military slogans in Tahrir Square in Cairo on November 21, 2011, calling on military ruler Field Marshal Hussein Tantawi and his council of generals to step down in favor of an interim civilian administration. 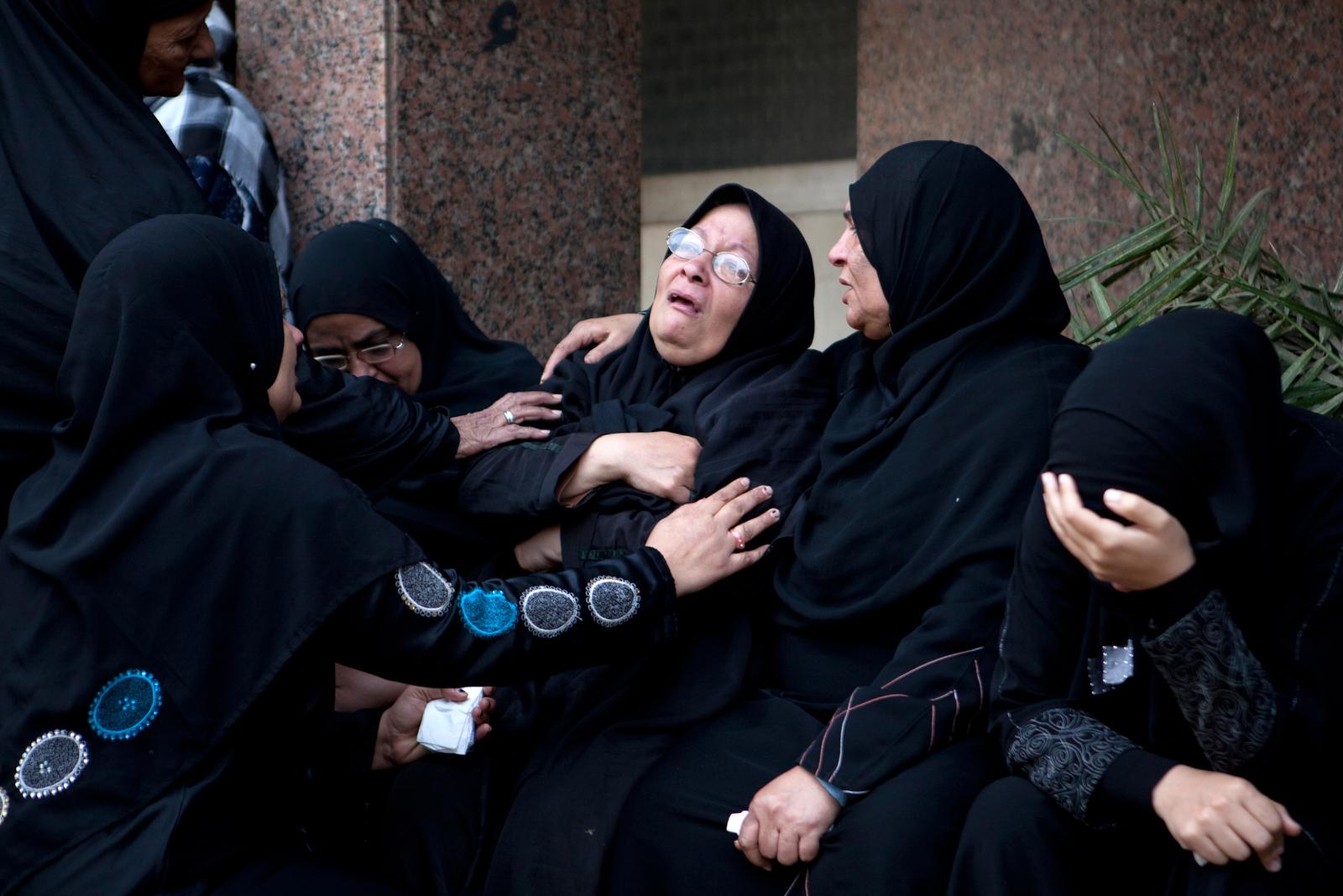 EGYPT
The mother of young protester Ahmed Serour is comforted by relatives as they wait to receive his body at the Zeinhom morgue in Cairo on November 26, 2011. Ahmed Serour died earlier in the day when Egyptian security forces clashed with protesters camped outside the cabinet building where pro-democracy protesters camped overnight to block the entrance of the newly appointed prime minister. 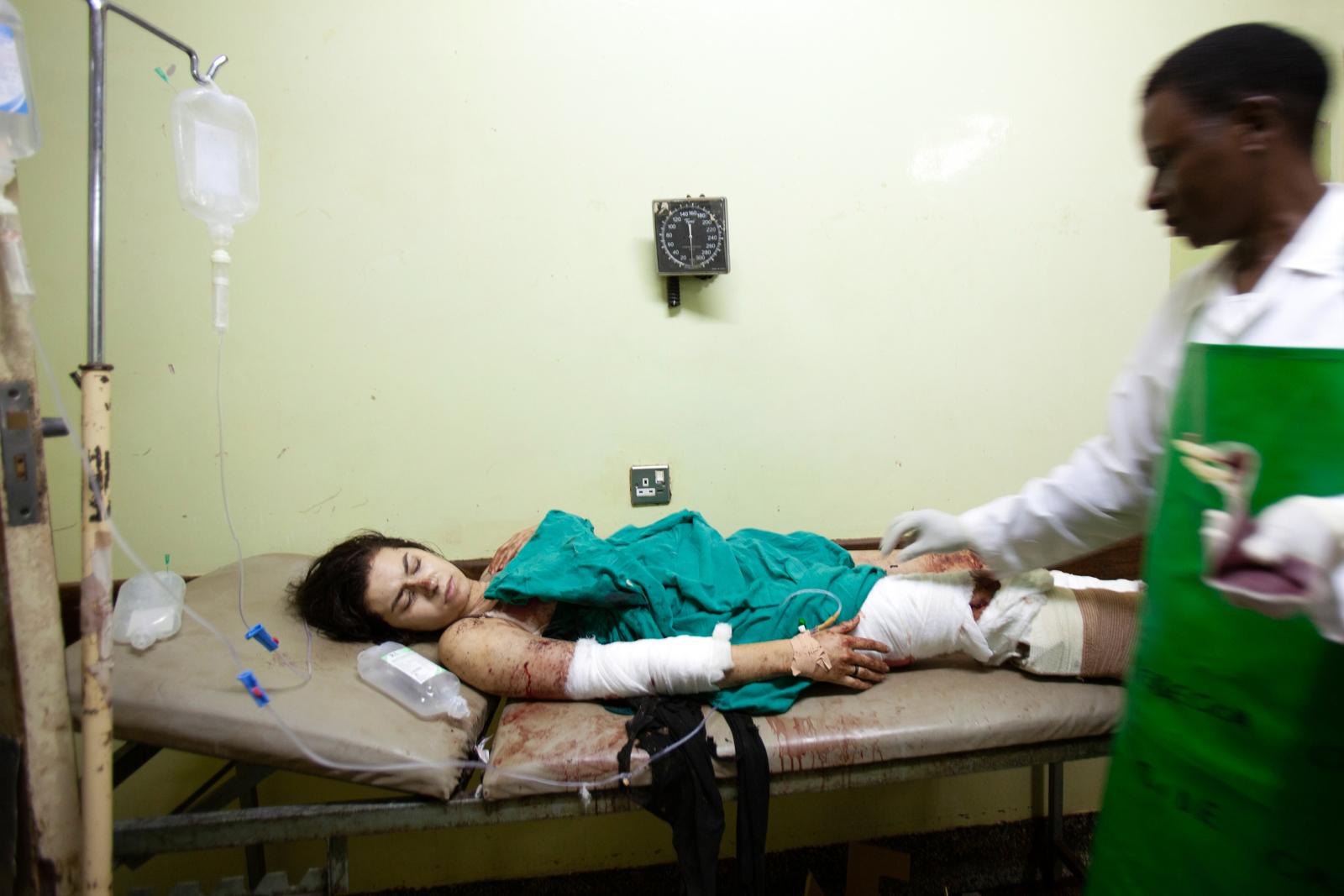 UGANDA
A paramedic attends to an unidentified US citizen at Mulago Hospital in Kampala on July 11, 2010. Suicide bombings were carried out against crowds watching a screening of the 2010 FIFA World Cup Final on July 11 at two locations in Kampala, the capital city of Uganda. The attacks left 74 dead and 85 injured. Al-Shabaab, an Islamist militia based in Somalia that has ties to al-Qaeda, claimed responsibility for the blasts as retaliation for Ugandan support for AMISOM.

Bénédicte Desrus is a French documentary photographer based in Mexico who focuses on social and human-rights issues around the world.